Dhoni Gave An Epic Response To A Question Asked In A Press Conference.

Baahubali 2: 'The conclusion' is definitely winning hearts of many with its amazing script and awesome visuals. However, there is being a question on people minds which is “Why Katappa killed Baahubali” and that question may now has being answered.

With so much crowd Baahubali 2 pulled, some still have not got free time to watch the film and among them is our favourite cricket player Dhoni who hasn't seen the movie yet and has no idea why Katappa killed Baahubali.

In a press conference, a fan asked Dhoni the funny question and they were amazed to get an epic response from the batsman. He chuckled and said, “See no one answered me when I asked them," It is indeed a funny reply which left everyone in splits.

Mahi was totally involved in Indian Premier League and it’s obvious that he doesn't have enough time to watch the film as Dhoni still doesn’t know this secret answer yet.

Well it's surprising to know that some fans are creating issue out of Dhoni & Baahubali but the cricketer has no idea about the suspense. What is your view on this? Have you watched the film or not? 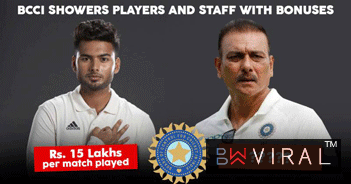